My time at Roman by Annalise

By Laura Reed
In Behind the Scenes, Company News
4 min read

Hi there, my name is Annalise I’m 19 years old and have just completed my first year doing media studies at Sheffield Hallam University. After hours of travelling and getting infuriated with the sat nav, I am now here in Newton Aycliffe to complete two weeks experience in the marketing department at Roman.

Let’s start off with my first morning then…

My first morning was very eventful, even before I’d got to work.

If 7am wasn’t already a shock to the system for a university student like me. Getting myself locked in the bathroom, of a house I hadn’t even been in for 24 hours panicked me even more. However, luckily I was rescued and even after spending a good 5 minutes trying to drive FORWARDS into one of the staff car parking spots. Here I am, in one piece and working in the marketing department at Roman Ltd. 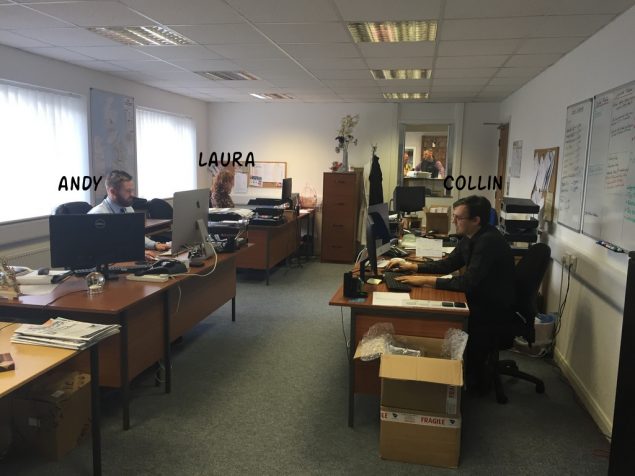 (The marketing department – where I am spending most of my placement)

Although I’ve already had one years of experience briefly covering marketing through various modules in my university course, I have never come across the subject of showers, therefore making me slightly apprehensive about starting my placement.

On my arrival I was greeted by Marc who gave me a brief insight into the company’s history, as he is one of the long reigning members of staff.

He also made me a cup of tea, which was great.

Marc later introduced me to Sue, Laura, Andy and Colin who are all members of the marketing department. I also met another large handful of people who I would love to name but my memory is dreadful.

It’s only been 4 days but I feel as if I have done so much already.

On Monday, Sue took me on a tour around the whole building (which is absolutely huge!) I learnt how all of Roman’s shower products were made and shipped. I’ve also been taken on a tour around the showroom, which gave me a clear insight into what the products look like when they’re finished.

All this shower talk made me want to go out and buy my own shower, really. 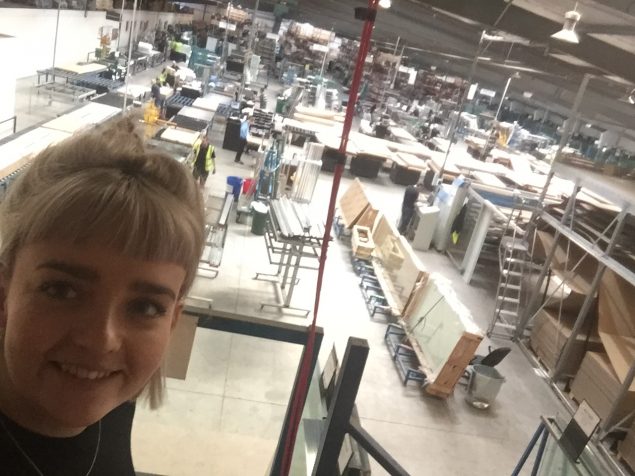 (Yep, that’s me there. In the factory)

Other tasks I’ve been involved in include, creating an email campaign for Roman’s Anti-Slip Kit. Through doing this I have learnt how Roman target their particular audiences and how they use various techniques to create their web advertisements. This has probably been my favourite task so far.

Completing a blog about tea towels was interesting. I mean there is only so much that you can really talk about a piece of cloth. However, it was actually a pretty difficult task to do. My awful attempt of trying to apply various types of hyperbolic words to just a tea towel went ok in the end. (I think!)

Throughout the week I have also been writing up the product content for Roman at Home’s website based on their new Christmas stock. Yep, I know, it’s only July but it’s never too early to get into the Christmas spirit.

I’ve also started (to attempt) a press release detailing my work experience at Roman. This has definitely been my trickiest task so far as it’s supposed to be formally written.

For all of you who have had to painfully endure my blabbing on so far in this blog, you can probably see why I’m finding ‘formal’ difficult. However, I’m enjoying exploring something new, such as the PR side of the marketing department at Roman.

So far my time at Roman has consisted of a lot of names, a lot of information and a lot of cups of teas. However, everyone has made me feel so welcome, therefore I’m excited for next week to get involved in the practical side of Roman’s marketing department, which includes photography.