Behind the Scenes of a BBC News Interview 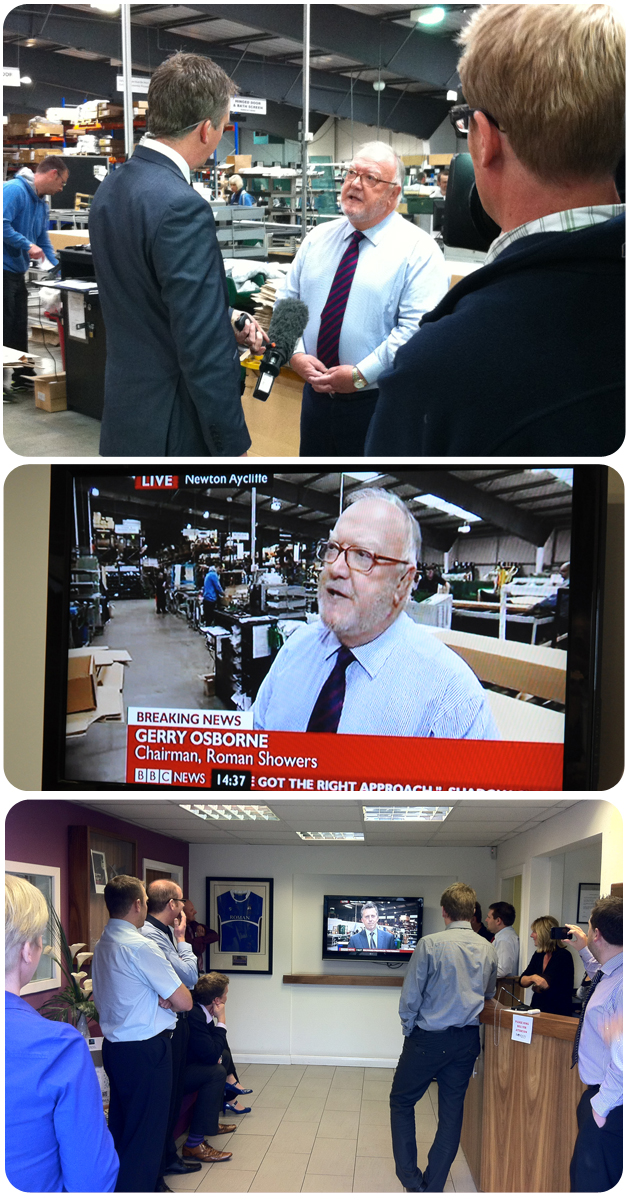 This week has been a very exciting one for all of us at Roman. On Monday we received a phonecall from BBC News, who were intending to carry out a series of interviews around Aycliffe Business Park, about the GDP figures on the day they were announced. As one of the key manufacturers on the park, they were very keen to come in and interview a representative from Roman. We of course were delighted to be involved, alongside some of our neighbours, and our Chairman and founder, Gerry Osborne, was put forward as the interviewee.

On Wednesday, the day prior to the interview, the producer came along for a reccy, to make sure they would be able to get the cameras in and film the interview. Because the interview was scheduled to go out live, they understandably didn’t want any hiccoughs or complications on the day. This all went fine and they were happy to carry on and film from Roman the following day.

The interview was scheduled to go out between 2pm and 3pm, with the News team also visiting our neighbours over at Ebac, Carlton Group and PWS throughout the day. We had the TV tuned to BBC News ready to find out the GDP figures, so we could comment on this and how it related to our business as a British Shower Manufacturer.

The News team arrived a little bit later than expected, so it was a mad rush to get the cameras all set up. The presenter, Nick Ravenscroft, took Gerry to one side to chat to him about Roman and prepare for the interview.

Here are some key sound bites from the interview with Gerry:

Commenting on the fall of 2.5% by the Construction sector:

“It’s really a surprising figure yet again because the office of statistics keeps coming out with this negative 2.5% on this particular occasion where we believe it is a combination of public and private sector. The private sector is what we are really interested in, in terms of housebuilding … that’s really doing rather well this year.

“A lot of effort has gone into renovating that, regenerating that, and that is what the government really needs to support now.”

“Well he is no relation of mine, but of course I certainly support what he is doing, and it’s the important thing, we really have to cut our cloth now. We really stepped over the mark with the public sector, and I believe it was out of control to the larger extent. The collapse of the banks was a tragedy. We’ve got to recover from that now in a careful, measured way. And it’s a slow recovery.

“For the company we’re optimistic. For the country we’re cautiously optimistic. We’ve got the right people in control, and we need to be patient and support them, the government, the union, the opposition, everybody needs to get behind them and importantly we’ve had the euphoria of the Olympics. I think that was a great thing for Great Britain, and I think that now what needs to happen is the population, the Government, the opposition, the unions, we all need to get behind Made in Great Britain. Because that’s what’s important. It was a movement that began over 12 months ago and there are now 600 supporters for that, but I think we need 50 million participants for that too.”

Whilst the interview went out live, many of the staff gathered in reception to watch our 5 (or 3.30) minutes of Fame. A big well done to Gerry on his articulate and thought provoking interview.

Find out more information about the Made in Britain campagin that Gerry talked about in the interview on the Stoves UK website.