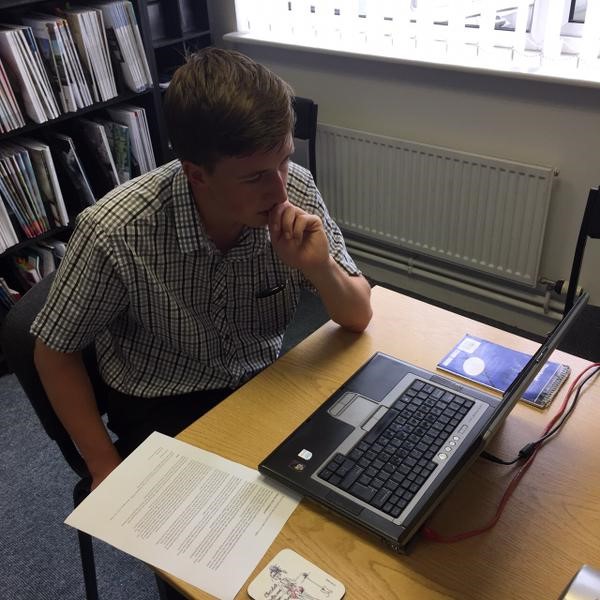 Hi, my name is Calvin Liddell and I am currently at Roman for a week’s work experience in the marketing department. At the moment I am in my last year at Longfield academy of sport before I go to college so I’m discovering what it might be like out in the world, here at Roman.

This is my second time here at Roman. On my first trip, during the six week holiday last year, my mom brought me down and I spent an entire day shredding paper. This time however I get my own little corner, with a great view out the window of the building across the street, where, over the coming week, I will be working on tasks such as blogs, press releases and promotional banners for Roman at home.

I spent most of my morning getting to know Laura, Andy, Tom, Linda and Sue and getting an overview of what they do. The afternoon was spent trying to find a version of Photoshop that would work on my laptop so I could start helping Andy with the banners.

Earlier this morning I was sat talking to Tom about what he does and he said that he chases down leads on contracts and that sounded like something a bounty hunter would do so I nicknamed Tom the bounty hunter. I’ve decided that over the week I’m going to try and think of a nickname for everyone.

First day on the job

So during my second day I have been doing little odds and ends for Andy. (I call Andy the IT Guy because he sort of maintains and improves the websites all the time whilst trying to make everyone else’s experience on the websites easier).I spent most of the day working on Photoshop to create the banners for Roman at home. At about half past eleven today the marketing department (which included me) had a meeting with the boss man himself, Mr. David Osborne. Although every now and then I found myself daydreaming a little I got to see how everyone keeps the boss up to date on what they have been doing over the past six weeks and what they are going to do over the weeks to come. After that I went for lunch because I was absolutely starving, and then finished off the banners and spent the last hour or so resizing a load of pictures into perfect squares for Roman.

Today I am going to be doing a press release for Laura on some Roman at Home products. (Laura’s nickname is Meredith because she reminds of the girl called Meredith from the movie brave). Now I realise that a press release might sound quite dull to other people but to be honest it’s actually kind of fun as I get to put my own little twist in it. It is proving to be pretty hard as I have to make it sound fairly professional for the company but I’ll get there in the end. 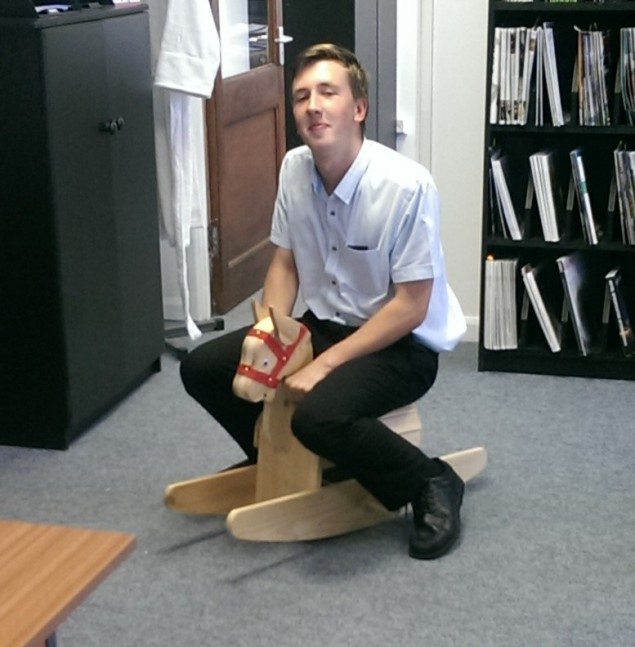 And you thought the marketing department was dull 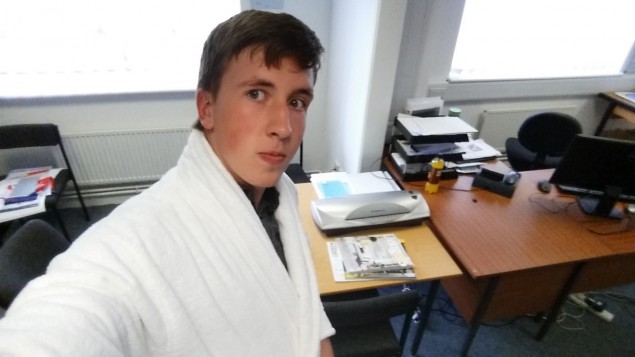 Well I finally finished the press release and it turned out to be a lot harder than I thought. I feel kind of sorry for Laura; she has to do that like nearly every day. Anyway, after I finished the PR I started getting on with some work that sue gave me. (Sues nickname is supersonic sue because she always seems to be doing a hundred different jobs). I had to peel of one side of the thin plastic cover on the display plaques off and then cut four pieces of double sided tape and stick it on each corner of the plaque. 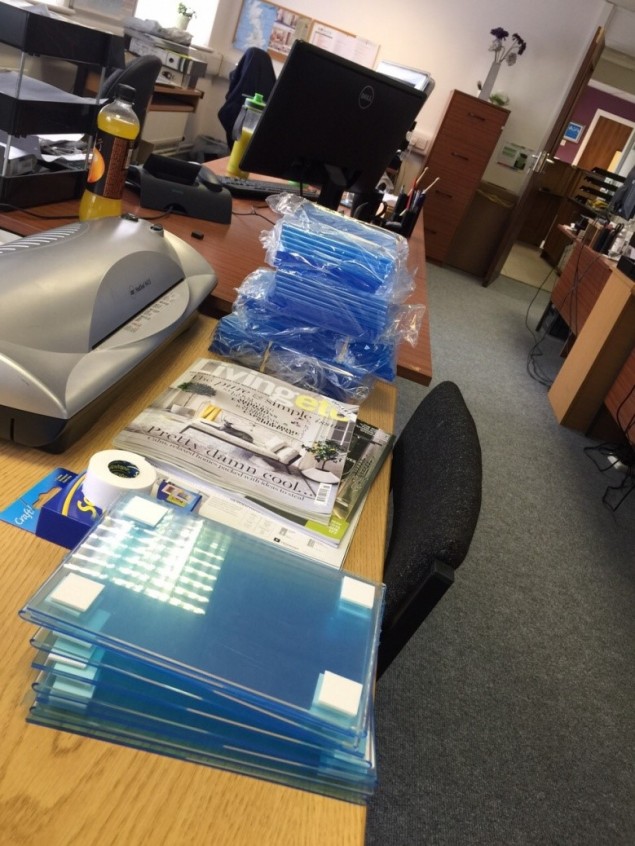 There are some of the plaques I was working on earlier

At one point this afternoon Andy, Sue and Tom had another meeting with David following up something from the other meeting about promotional videos. So this meant it was just me and Linda in the office (oh yea, Laura’s gone on holiday) and we started talking about superhero movies like the avengers, iron man, batman and the actors that play the characters and things like that. So while we were having this awesome little fan rage it gave me the idea for Linda’s nickname, which I’ve been stuck on almost all week. I’ve decided to call Linda the Oracle because she’s always on the phone to people and dealing with information and helping people out (just like the oracle is in batman).

Well today’s my last day here at roman L but who knows maybe I’ll come back and do another week my summer holidays (if they’ll have me of course). So today sue copied a whole load of pictures they took of a model, down at Romans in house photography unit showcasing some of the products, to crop and resize to make some banners that might be used on the roman at home website or a social media site. 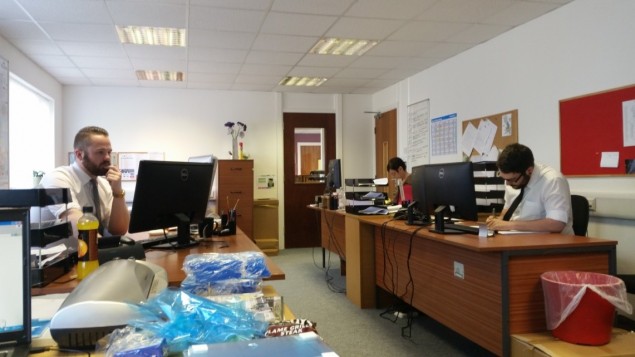 Well that’s it, the end of my week here at roman. It’s been so much fun and really beneficial and I hope to come back at some point and maybe do another week or so but for now it’s back to school. Thank you to everyone in the marketing department for having me and making my experience so much more enjoyable, and I hope to see you all again in the future. 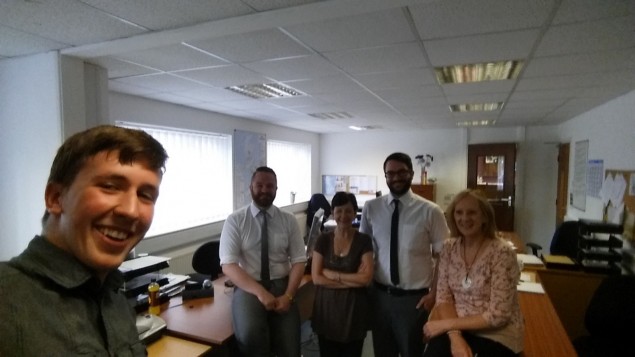 One last photo of us all (well nearly all of us)